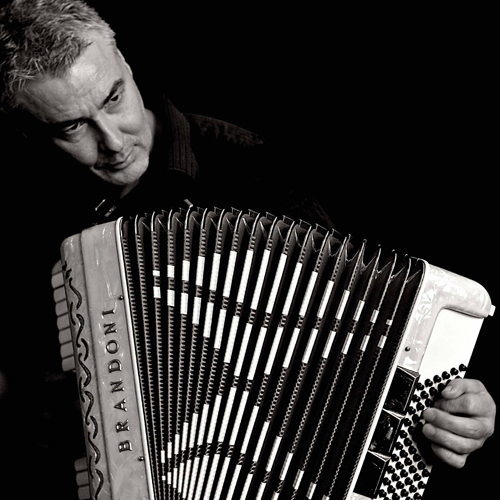 is one of the best known accordion players in Scotland today. He started his professional career with 'Black Eyed Biddy' in 1988 before going on to tour the world with Ireland's 'Davy Arthur'(of Fureys fame). He  was the featured box player in the hit celtic dance show 'Sheihallion' and he has appeared on many albums. He worked with the Canadian band 'Clan Terra' whose album 'Waiting for the Wickerman'  was released in the summer of 2000 and ClanTerra toured Scotland in August 2001. He has appeared on various TV plays like BBC's 'Monarch of the Glen' and 'Heartless' and in the film 'What we did last summer'. Check out his own website at www.gregorlowrey.co.uk and his album with Stevie Gillies 'The Game's a Bogey'. He recorded with young singing sensation Jamie Spence in one of 2007s best selling classical albums. Recently he has been a member of 'Bringing in the Spirit' band with Kirsten Easdale and ex-Capercaille member Marc Duff. He has appeared in films like 'What we did last Summer'.
In 2012 he released the critically acclaimed album 'To Wyle us Hame'- dedicated to his late friend Lionael Mclelland. His annual 'Troot Tour' with fiddler Pete Clark produced their 1st album together 'Caught and Released'. Gregor and Pete toured the USA in 2015.
In 2016-18 he has been touring with the show 'Auld Heids, New Hats'

To Wyle Us Hame

The Games a Bogey